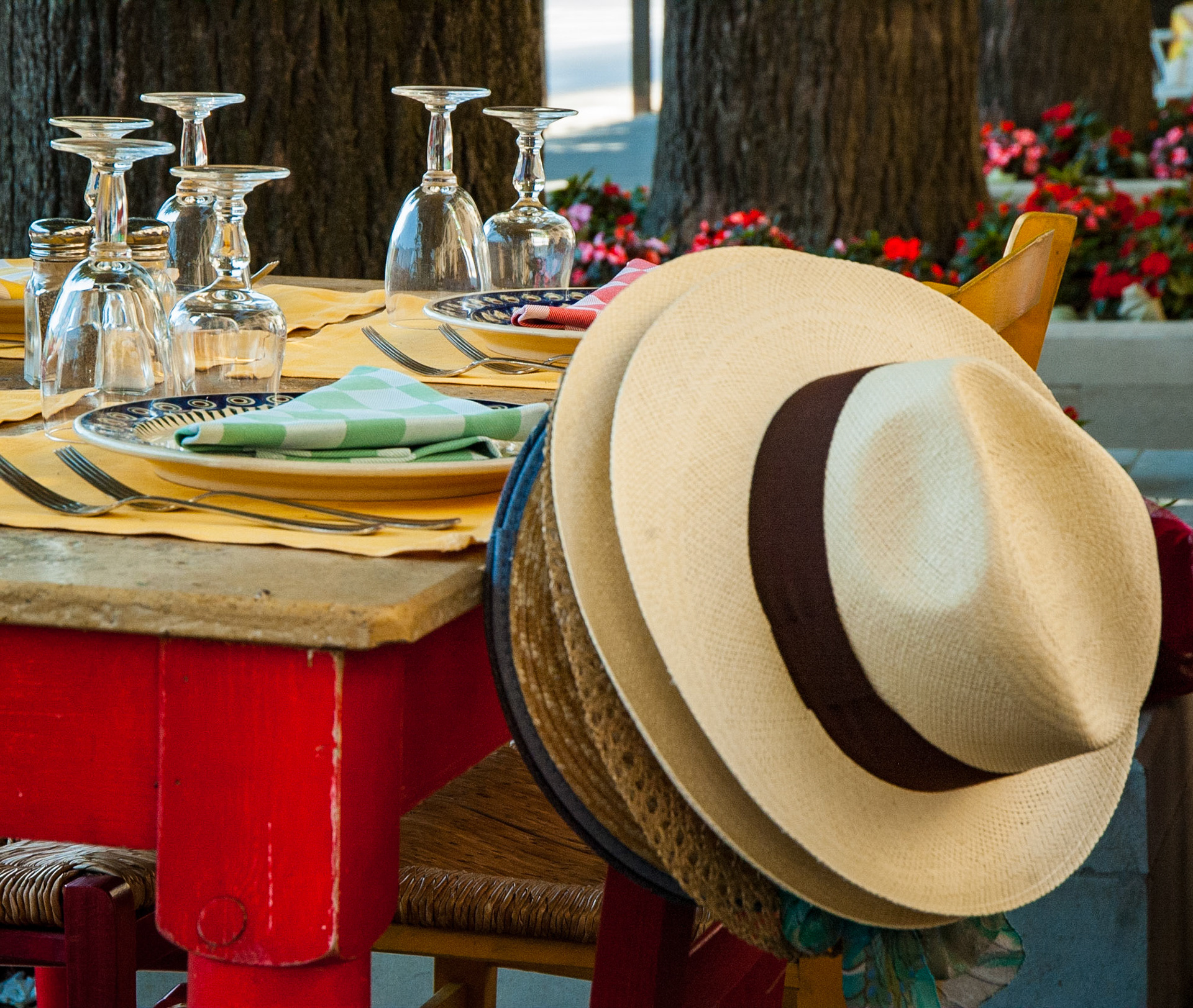 A stack of hats hang on the back of a chair at an outdoor café in Fiesole, Italy. May, 2005 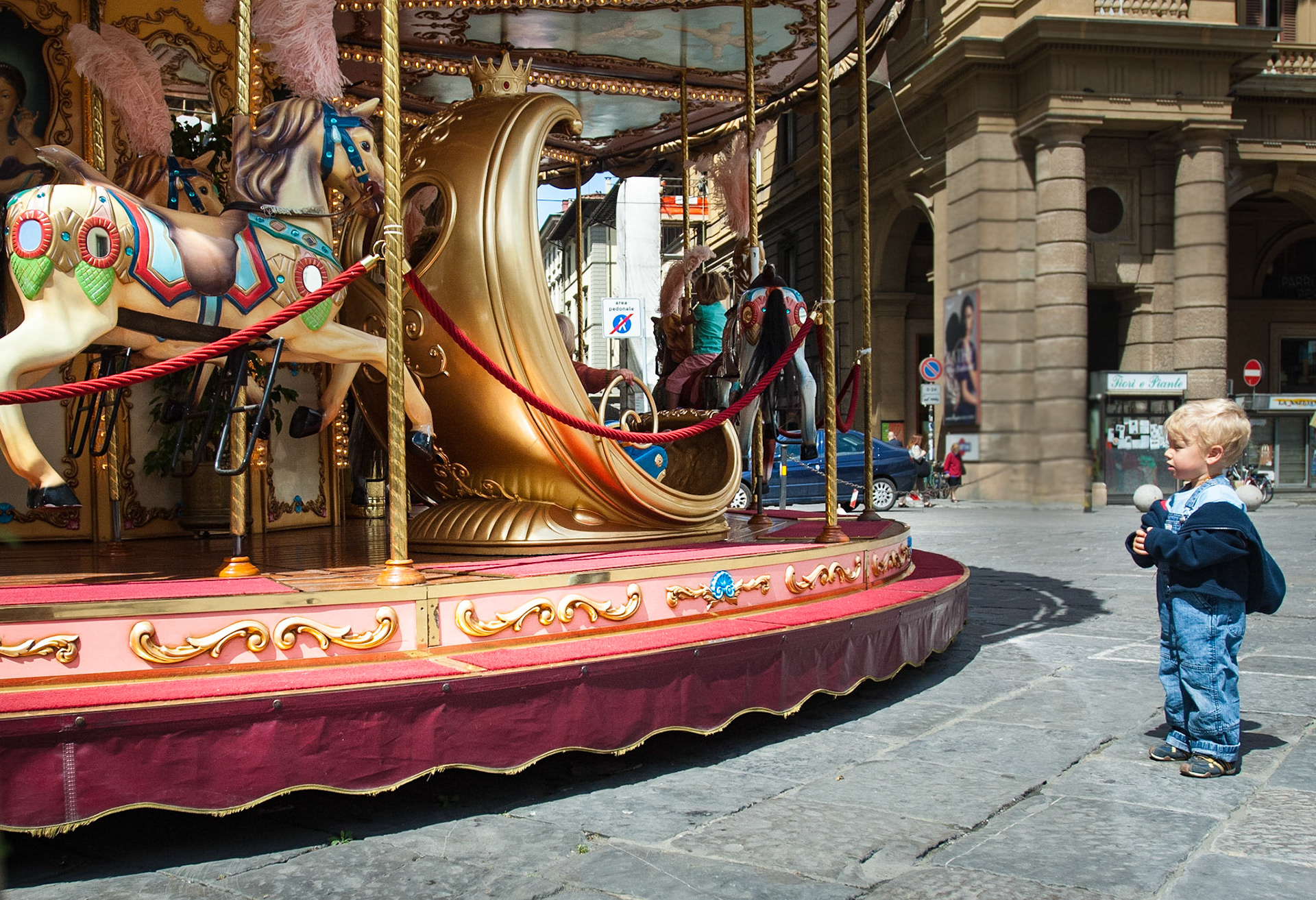 A carousel has been a long-time fixture on Florence’s Piazza della Repubblica and this is a good place to photograph children entranced by the colors and the motion of the ride. May, 2007 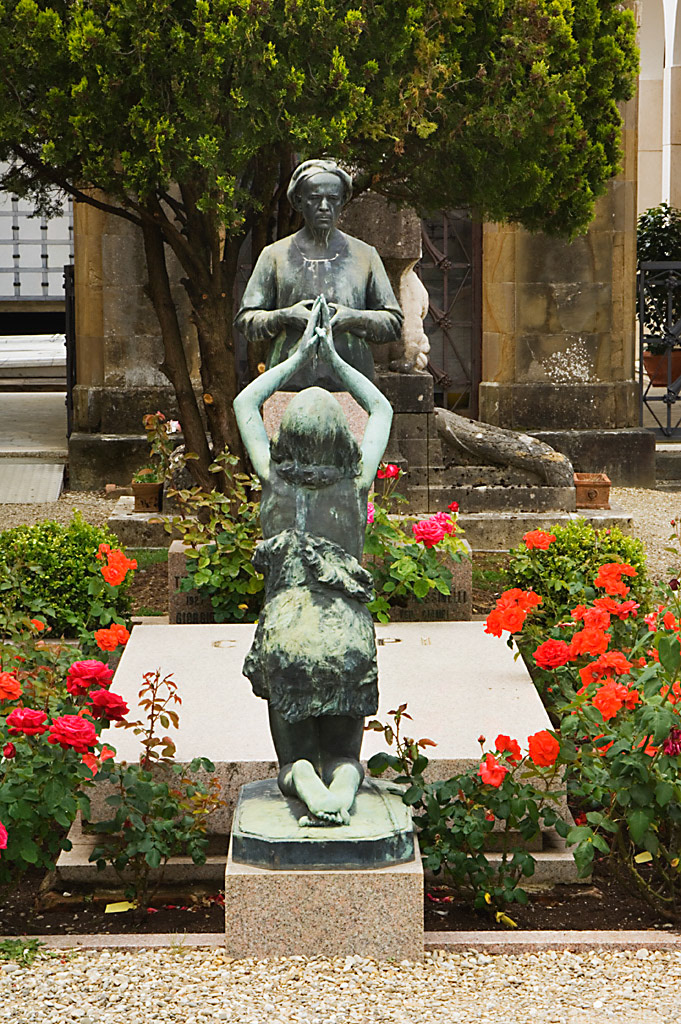 Two bronzes grace a tomb in the cemetary at San Miniato al Monte, in Florence, Italy 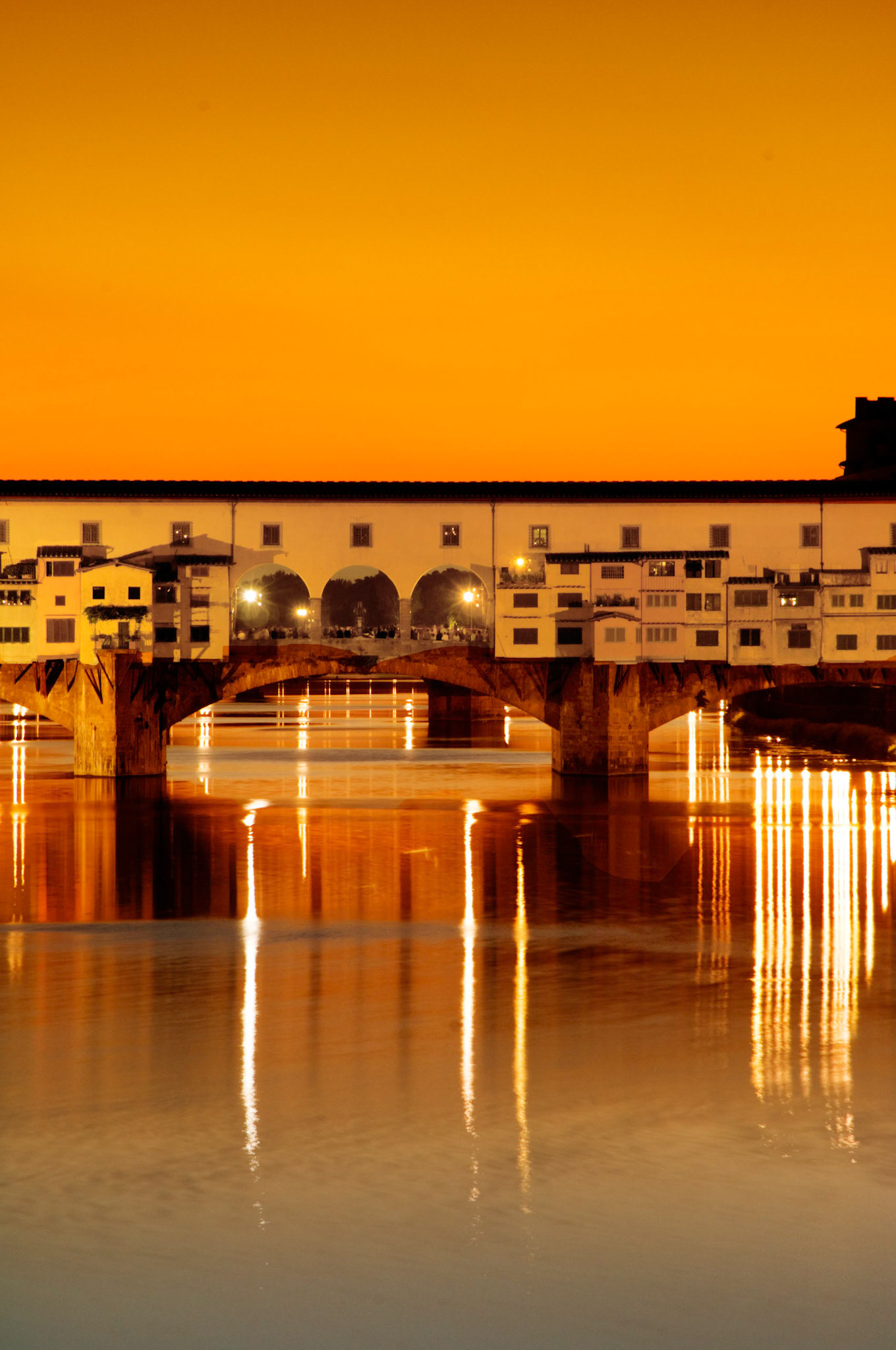 The Ponte Vecchio is the oldest of the bridges crossing the Arno in the heart of Florence. This image is about an hour after sunset, May 2007

This long cypress-lined drive leading up to a villa is near the small town of Bagno Vignoni. The sun has just risen, infusing the mist-laden valley with a golden glow. May 2007 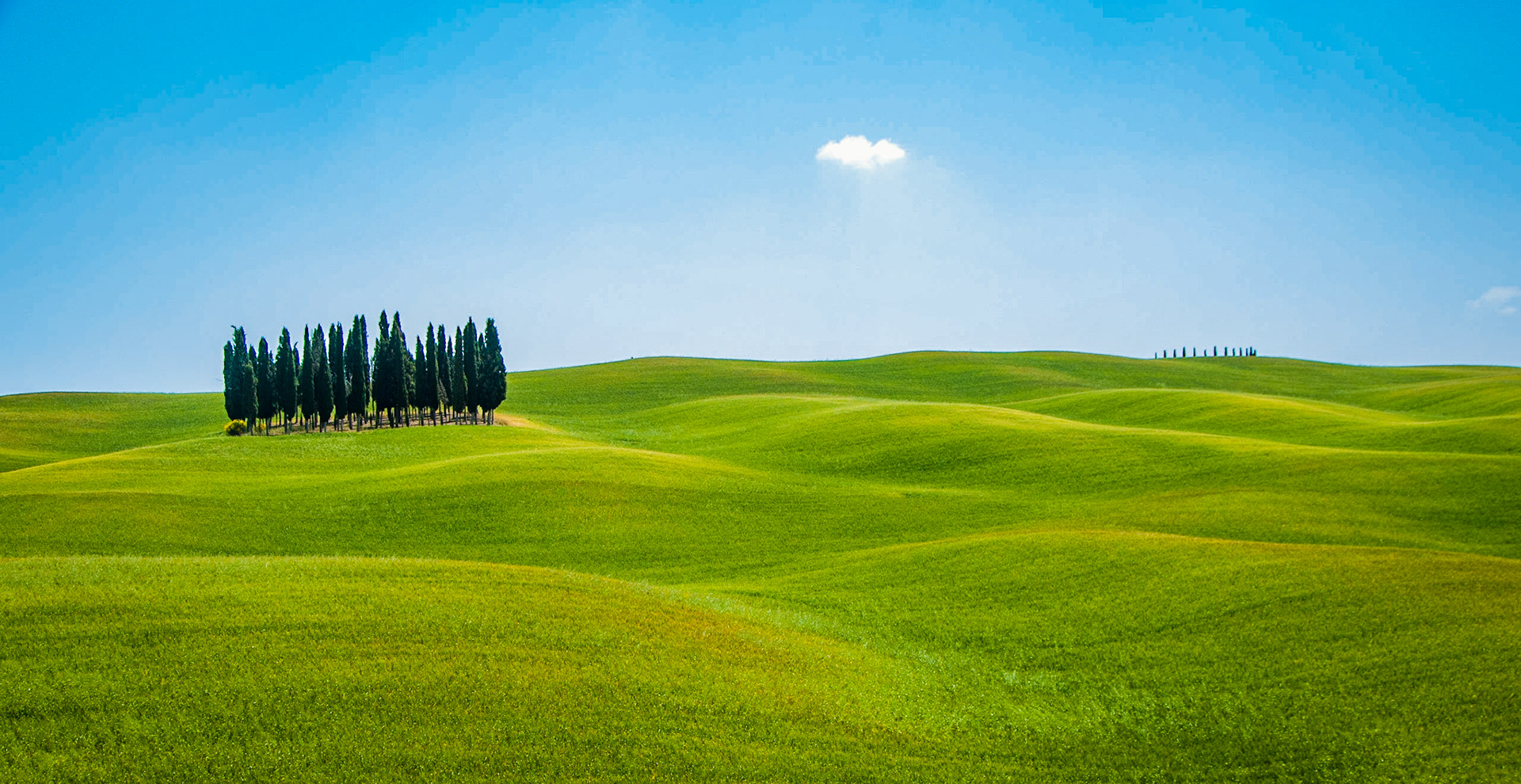 This grove of Lombardy cypress near Torrenieri have been featured in every Tuscan calendar and guide book that I have ever seen. May 22, 2007. 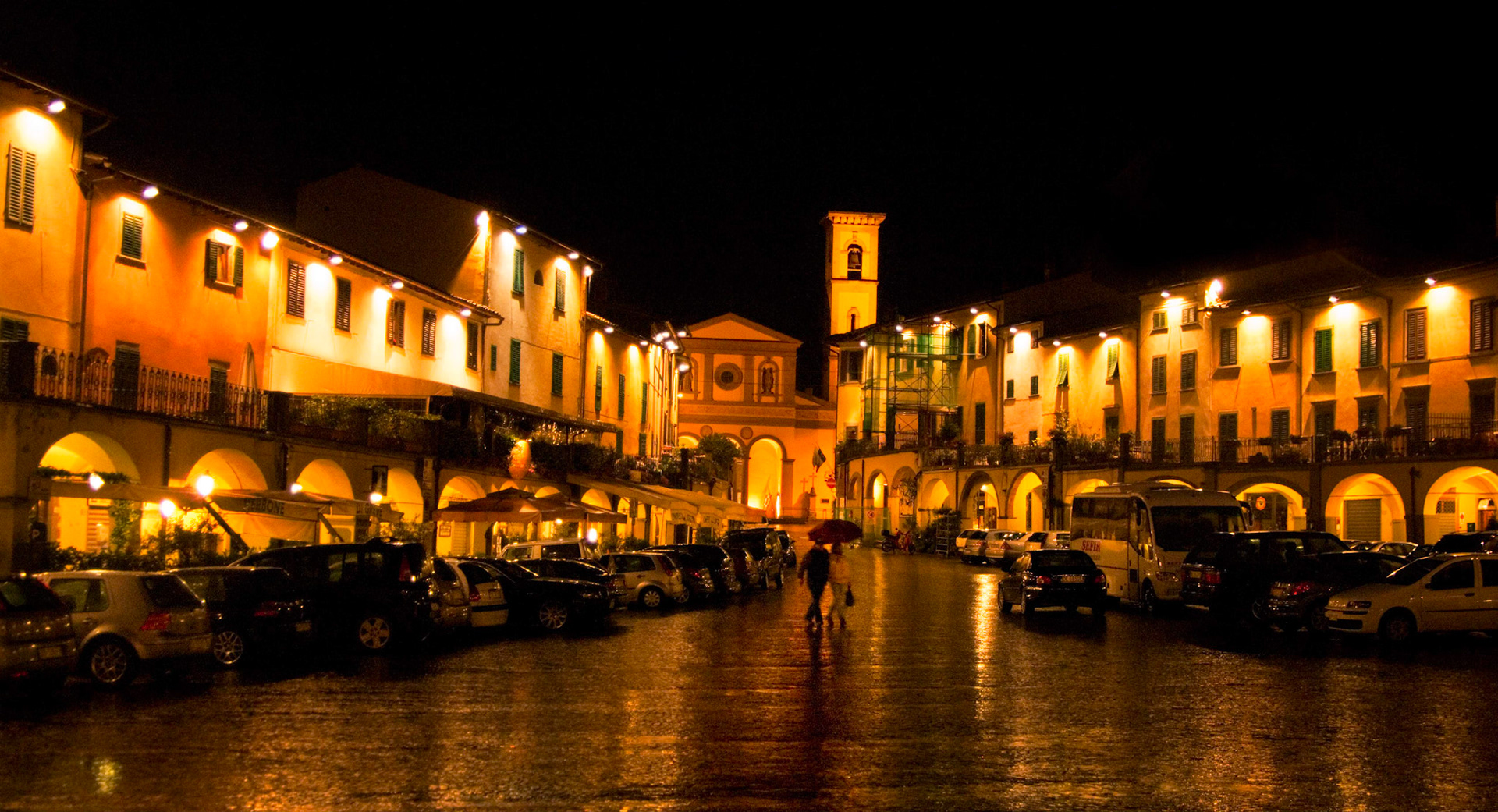 On this May evening the sole illumination is from the lights around this piazza in the village of Greve In Chianti. 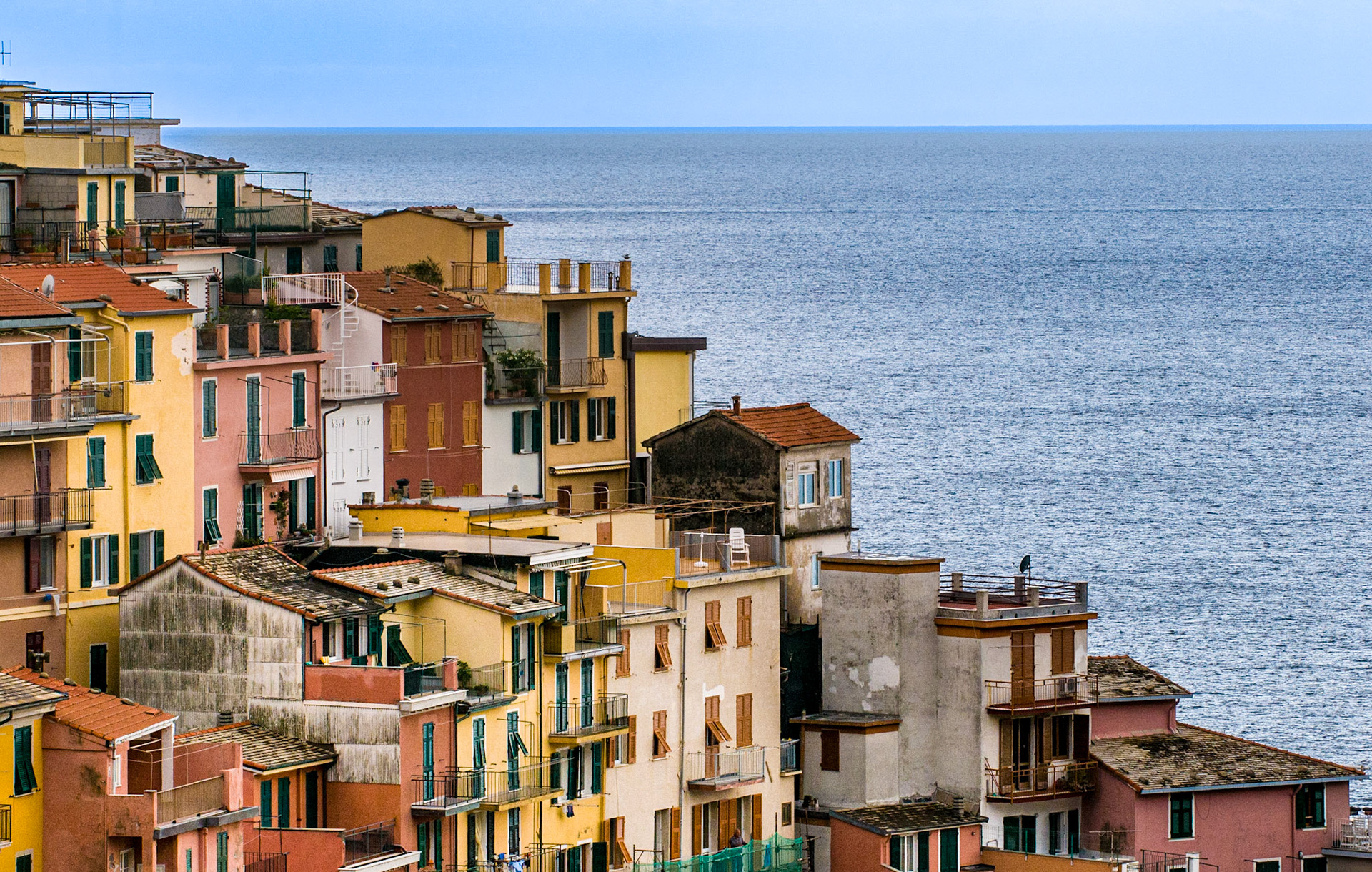 The villages of Cinque Terre on Italy’s Ligurian coast present stacks of colorful houses that spill down the steep hillsides. This is a portion of the town of Manarola. 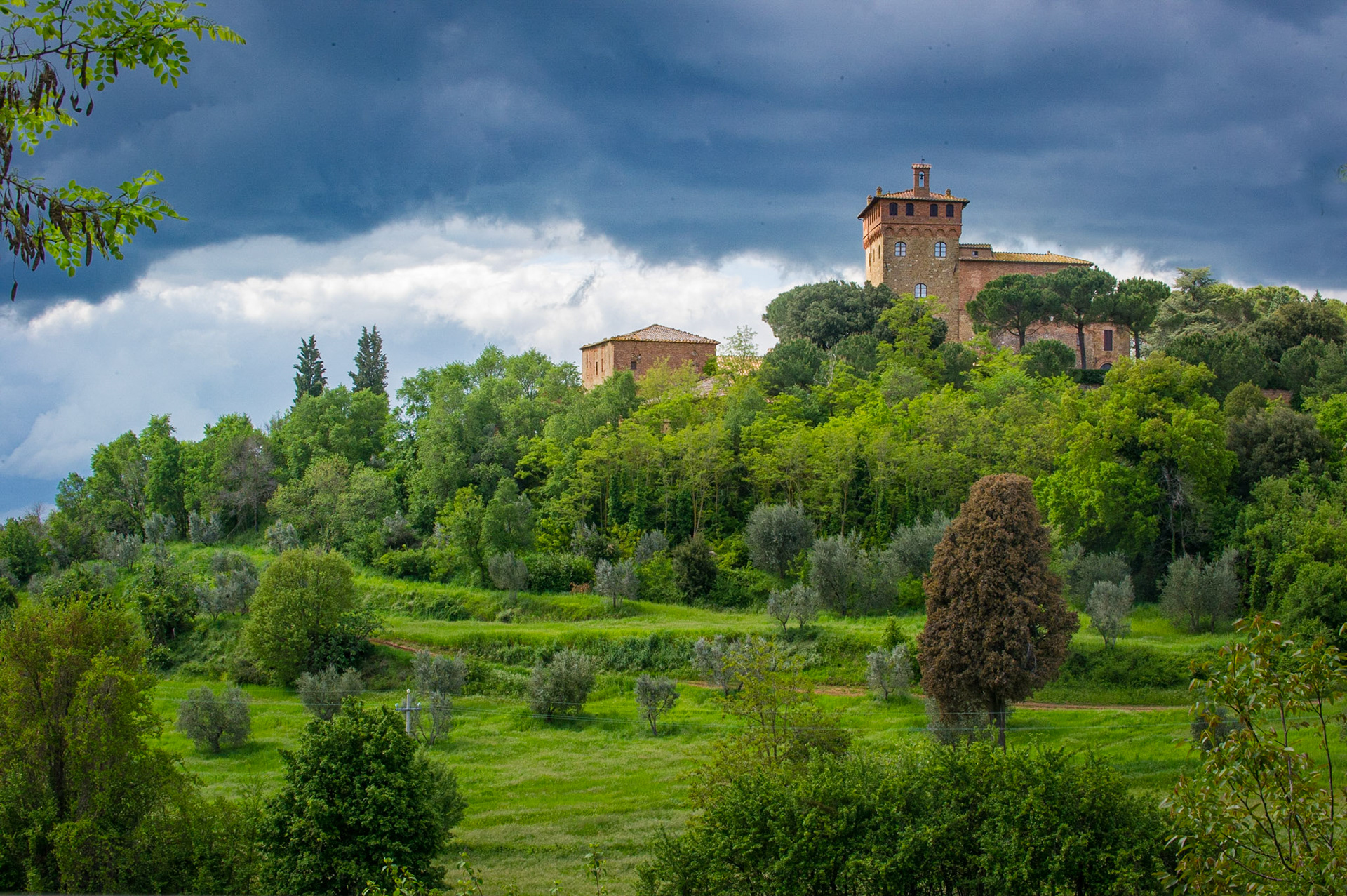 Between Montepulciano and Pienza is the Palazzo Massanini, the origins of which date to around 1200. Today it is among the many Agriturismi, converted farms and villa, that now provide guest accommodations.

Soft light seems to perpetually bathe the Val d’Orcia – valley of the river Orcia –every time I’ve been there, the light has been incredible. May 2010

Photographed at Torrenieri, behind the cypress grove. This is a two-shot stitched panorama. May 2010

The Val d’Orcia is a favorite of Renaissance painters and Twenty-first Century photographers alike. May 2010 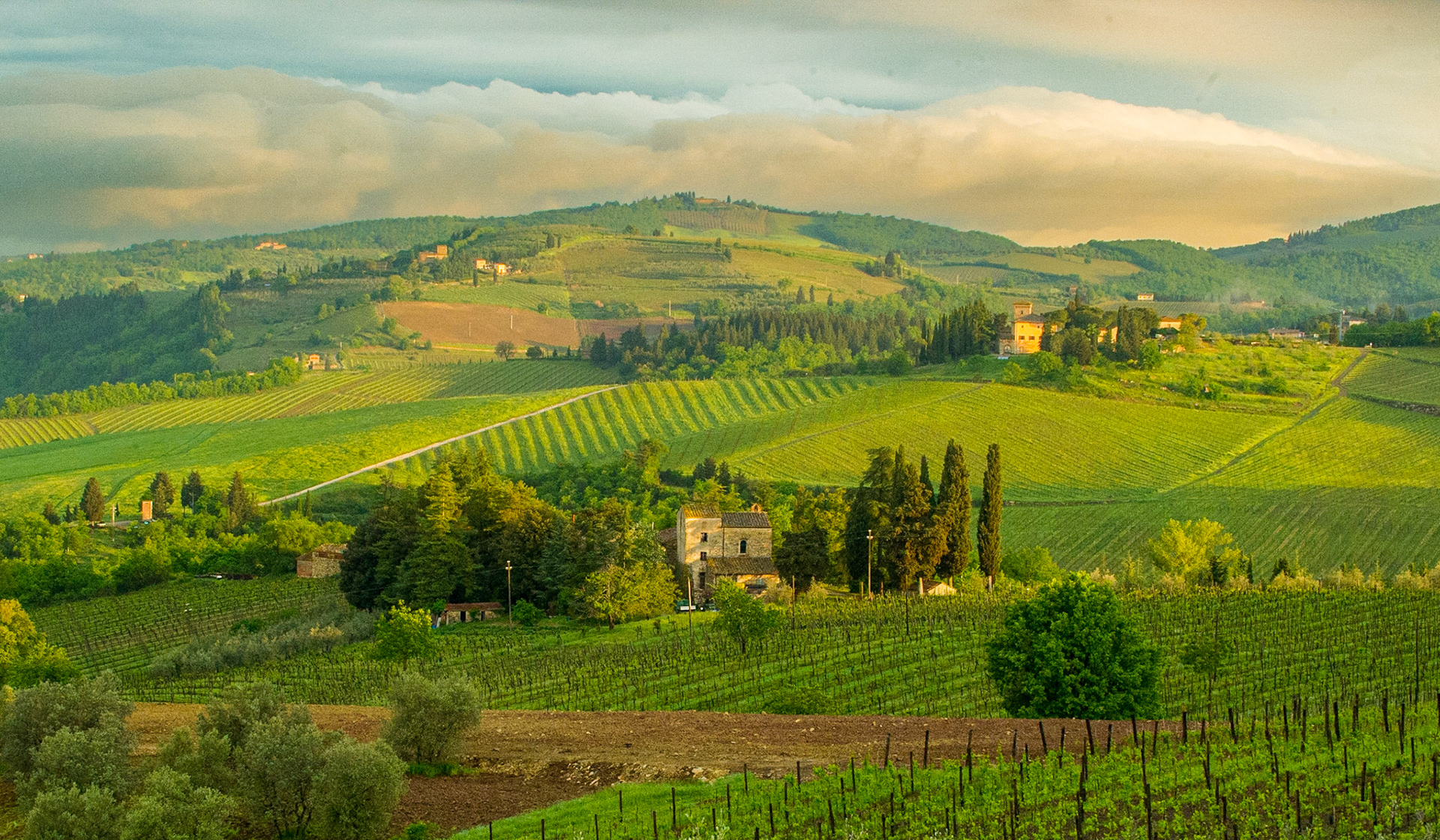 In an interlude after a week of rain, the sun broke through at sunrise. A few patches of clear sky provides bright highlights, between storm clouds. Fifteen minutes later, it was pouring again. 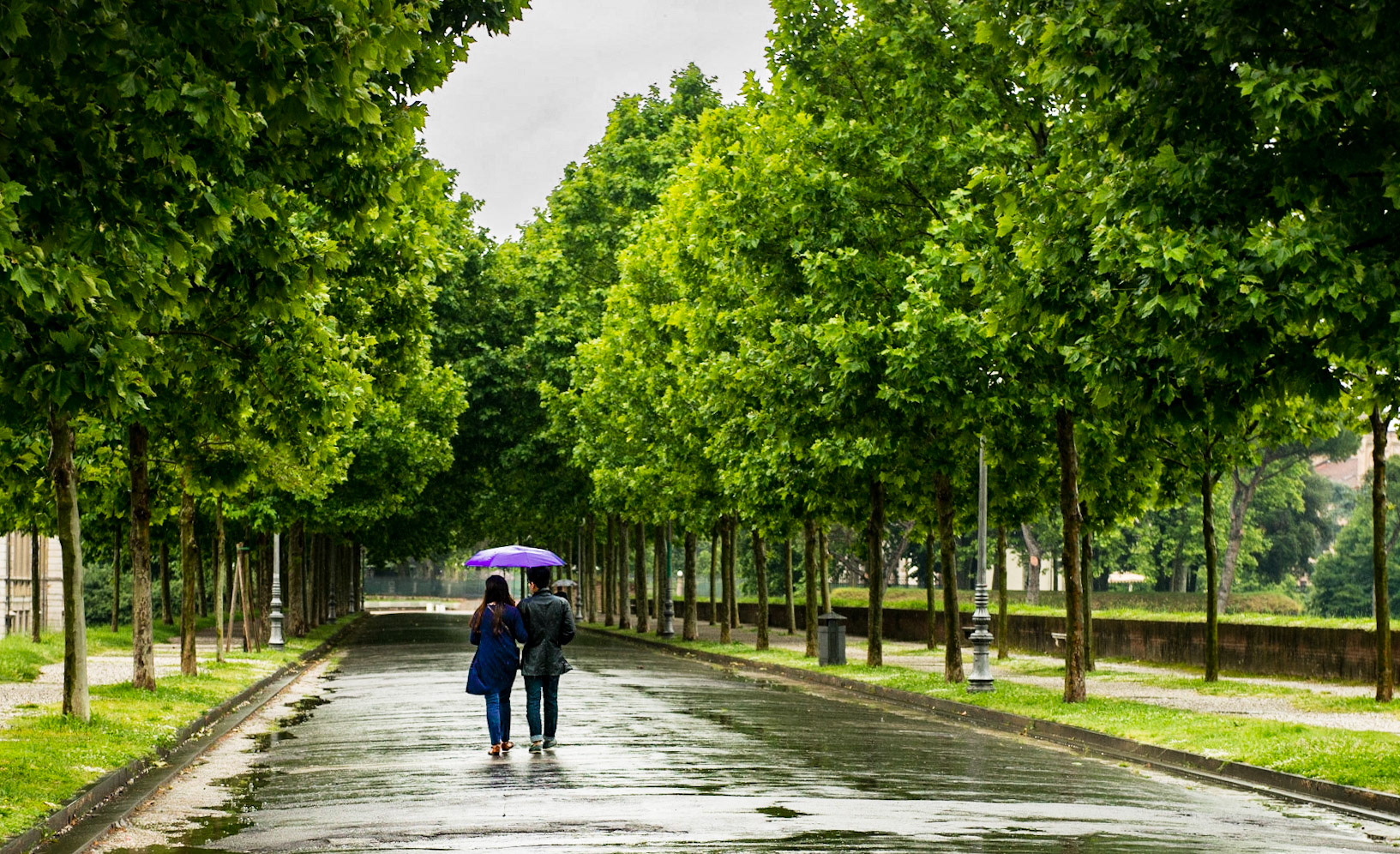 Lucca is one of the few Italian cities whose medieval walls are completely intact, providing a broad path for strolling lovers in the rain. June 2013 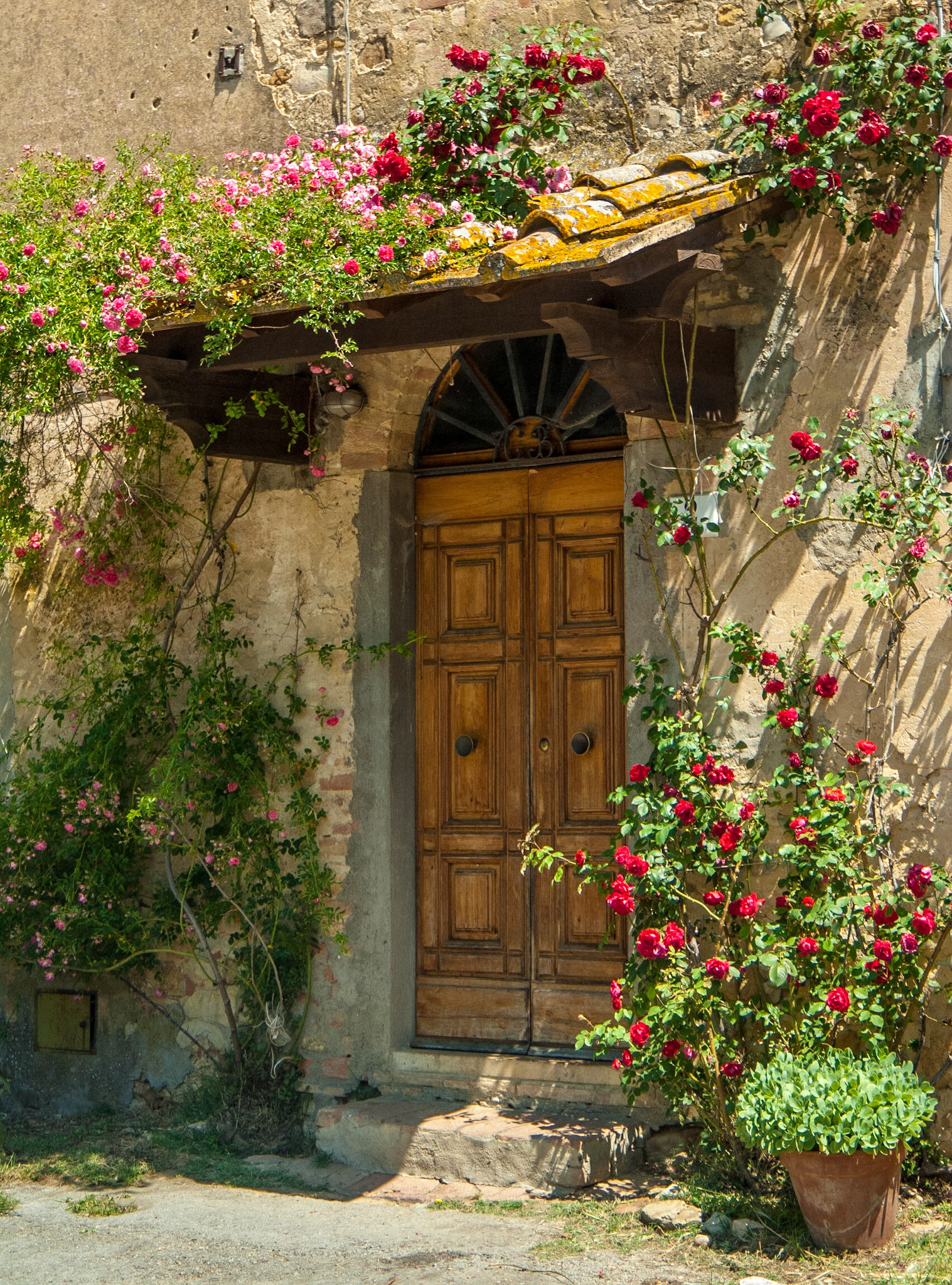 A small group of us photographing in Italy passed this farm house in Cedda, and marveled at the flower-covered entry. We stopped and asked permission to photograph, generously granted, and spent more than an hour. 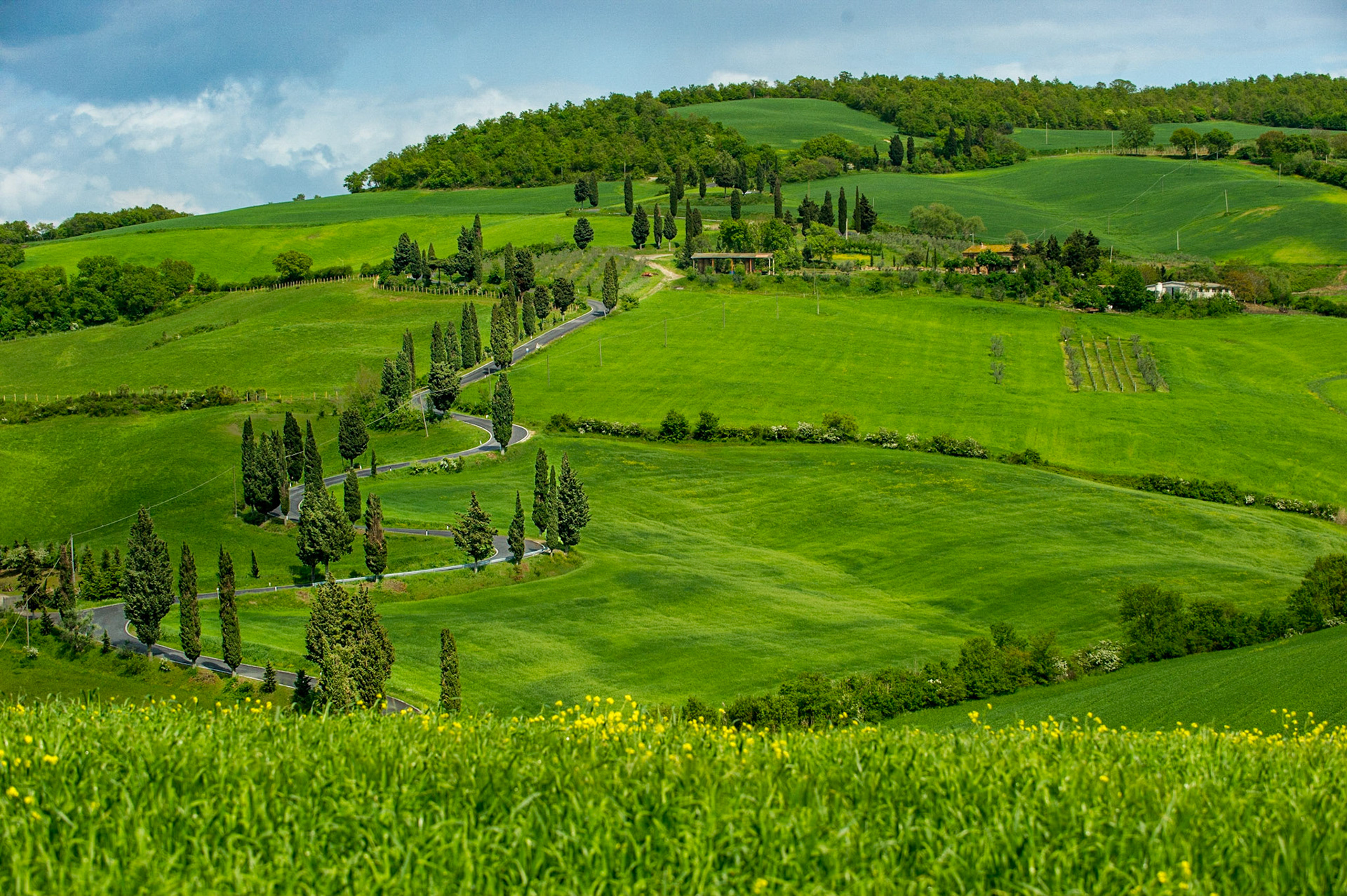 The picturesque winding road in this photograph runs north from the Tuscan town of Montichiello. 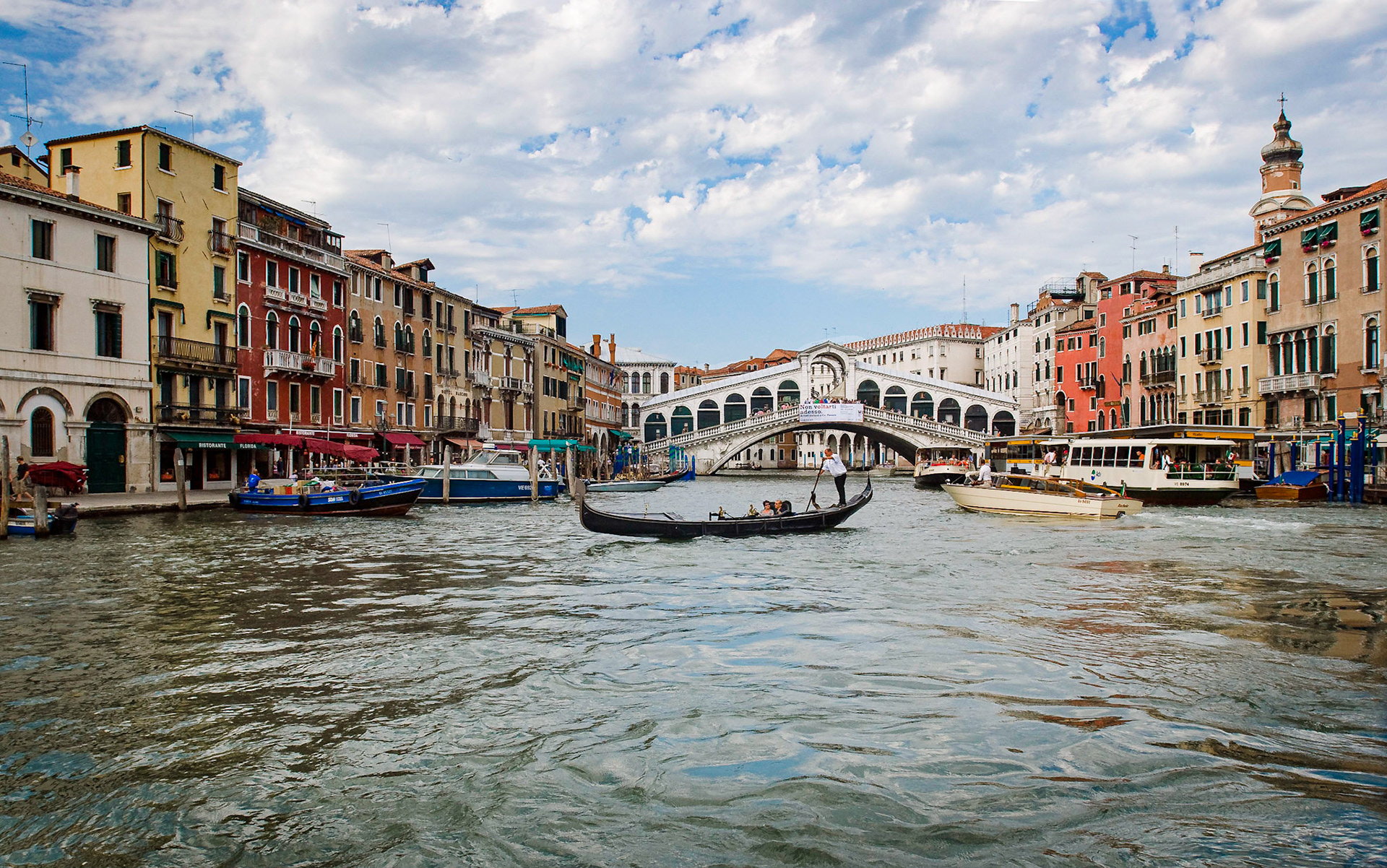 There is nothing more quintessentially Venetian than a gondoliero poling his craft across the Grand Canal just below the Ponte Rialto, the Royal Bridge. June 2009 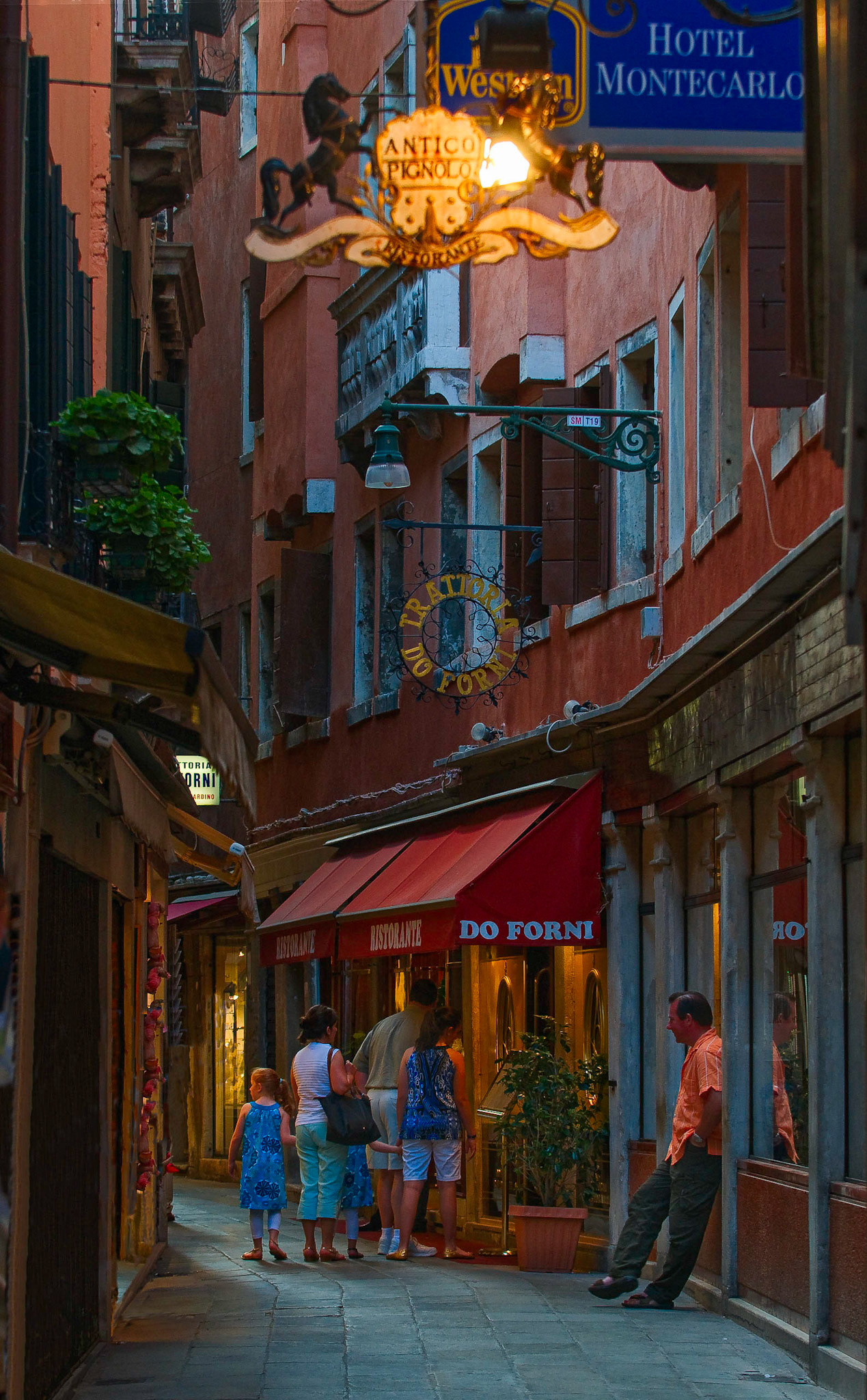 The back streets behind San Marco are filled with shops and restaurants. This night scene in on the Calle Specchieri, a narrow passageway near the cathedral 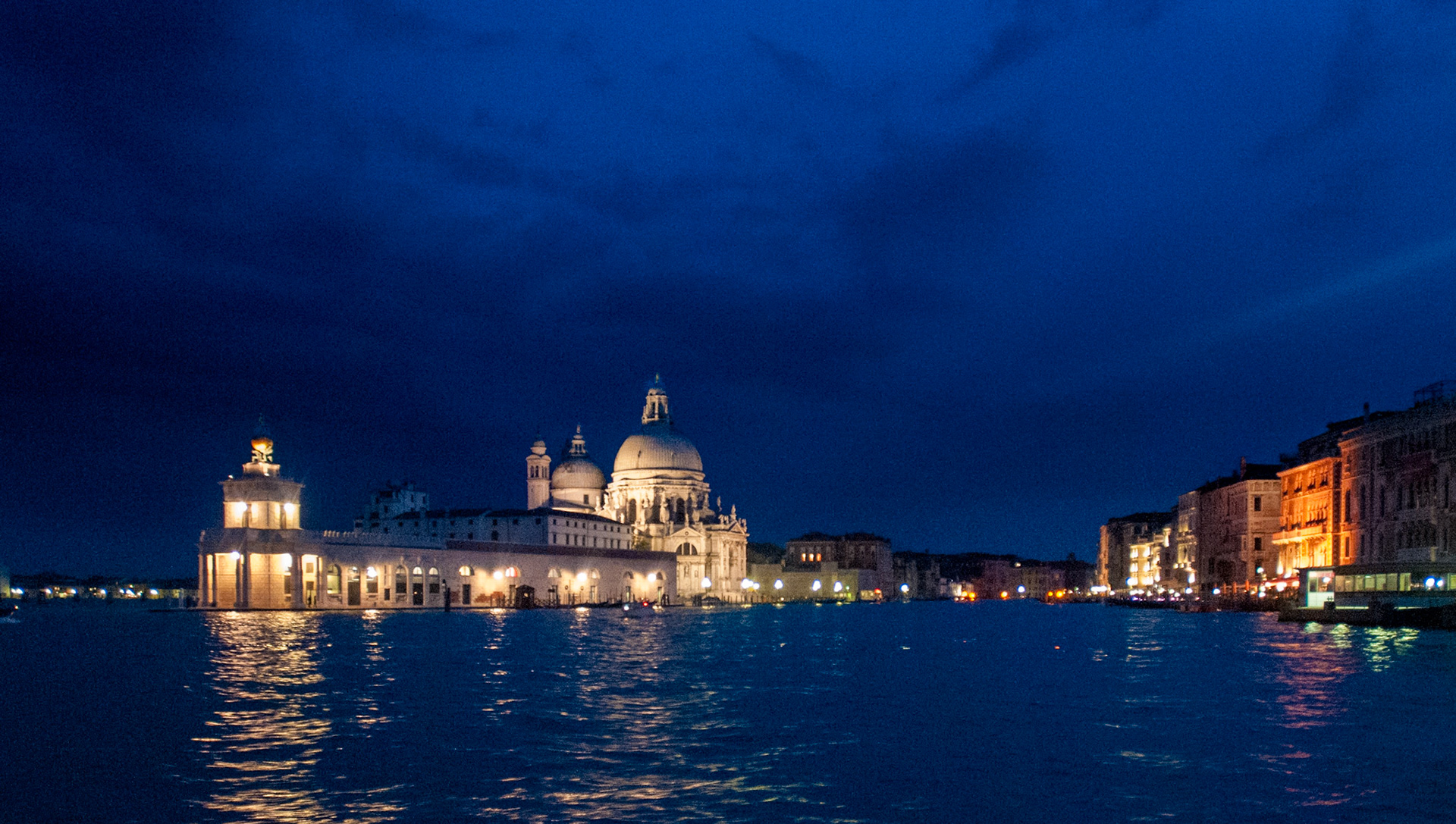 The Basilica Santa Maria della Salute shines brightly from its side of the opening of the Grand Canal into the lagoon. June 2009 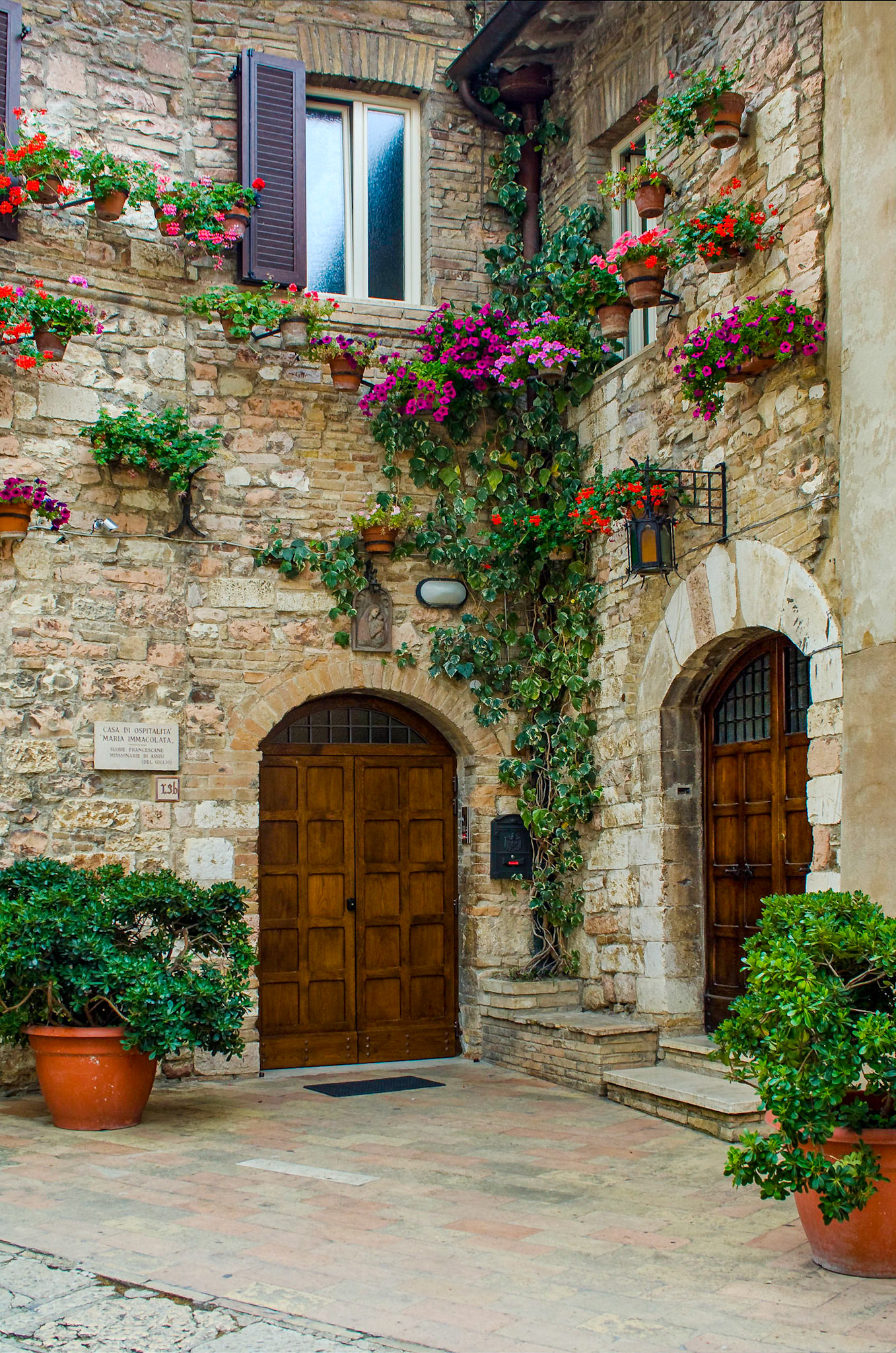 Vines and flowers on a doorway to a hospital, Assisi, June 2009 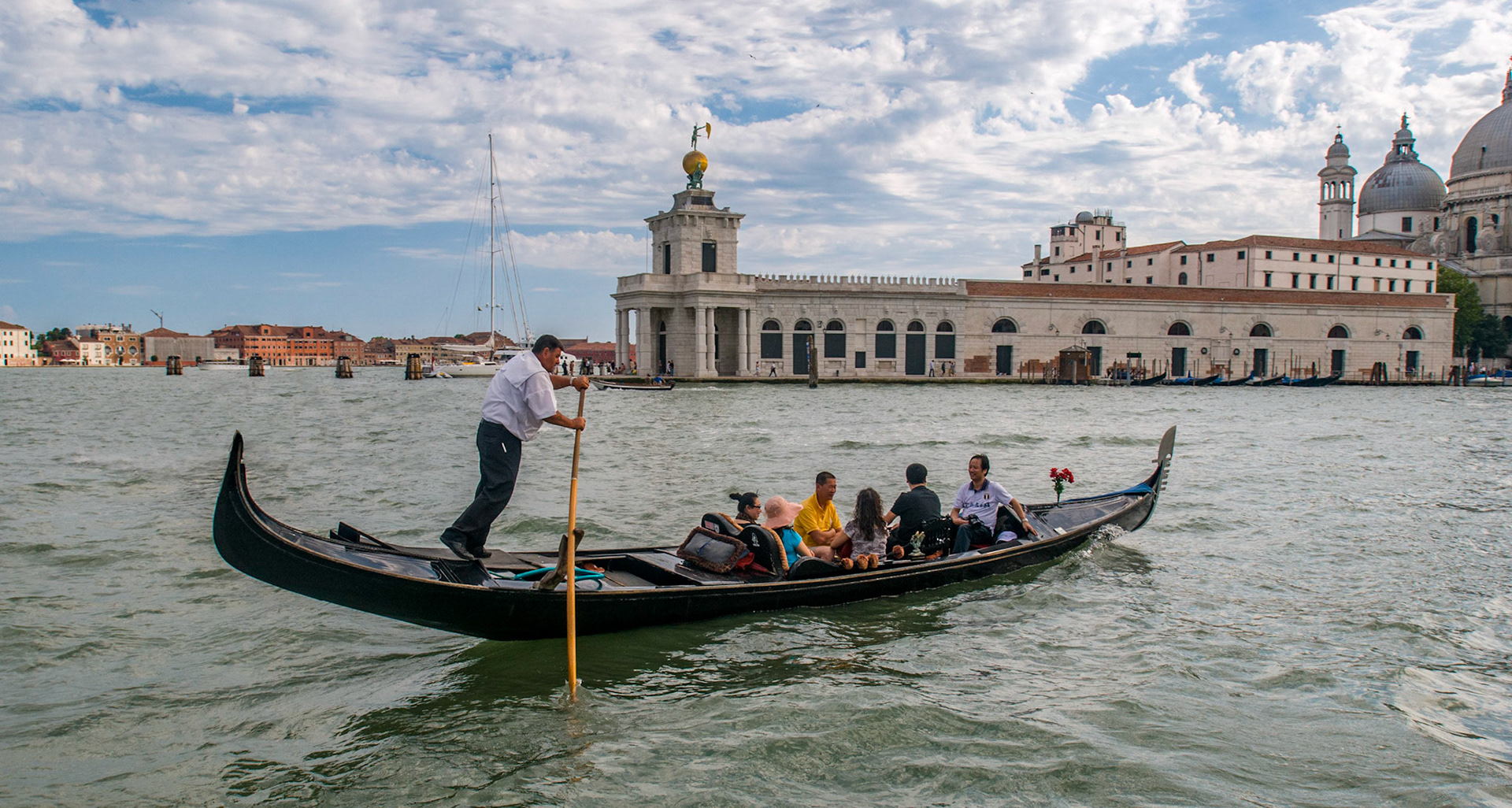 A trip by gondola through the canals of Venice remain a quintessential romantic experience in this city of waterways. 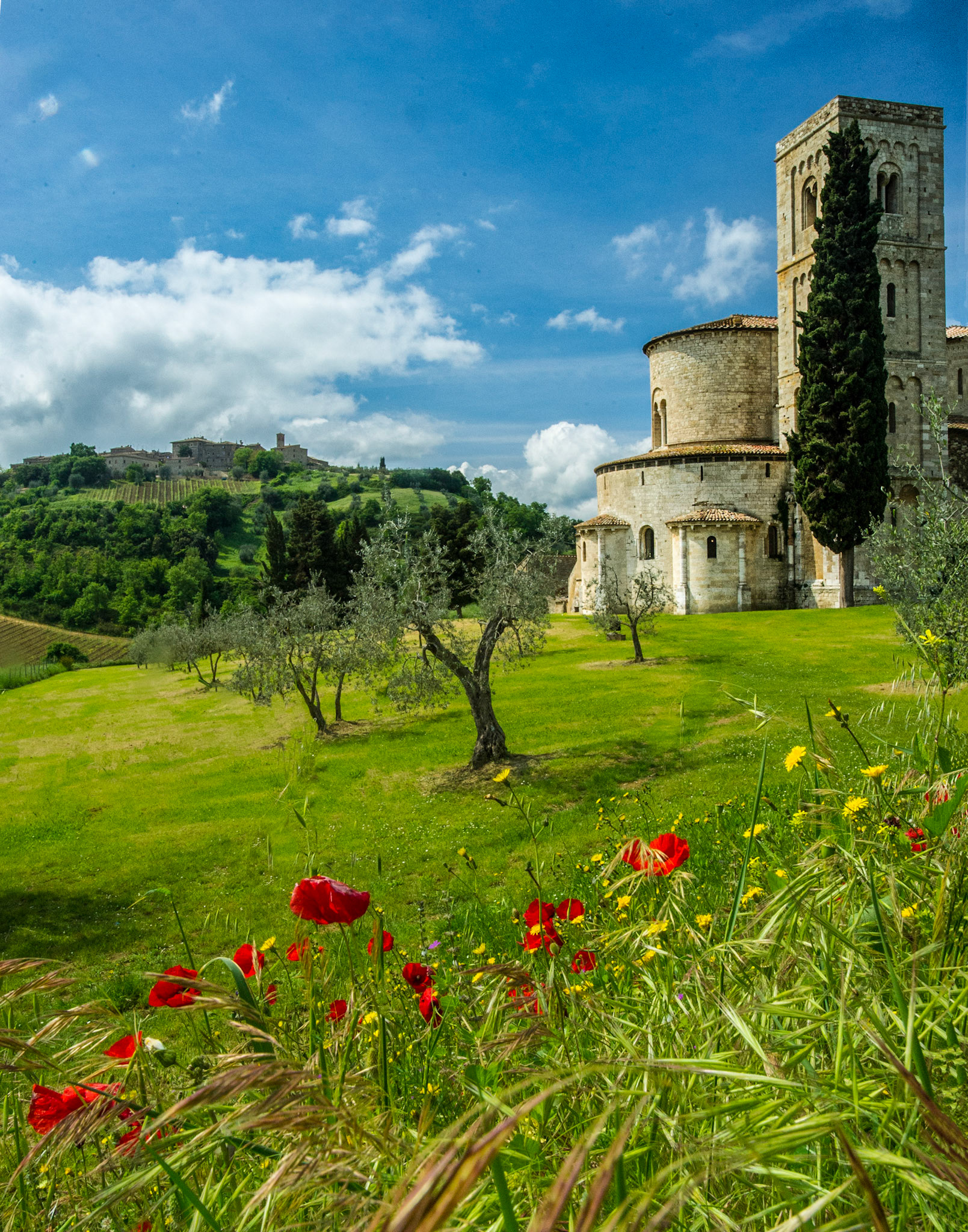 This former Benedictine monastery is in southern Tuscany near the village of Castelnuovo dell’Abate. There has apparently been a monastery here since at least the 800’s. May, 2010 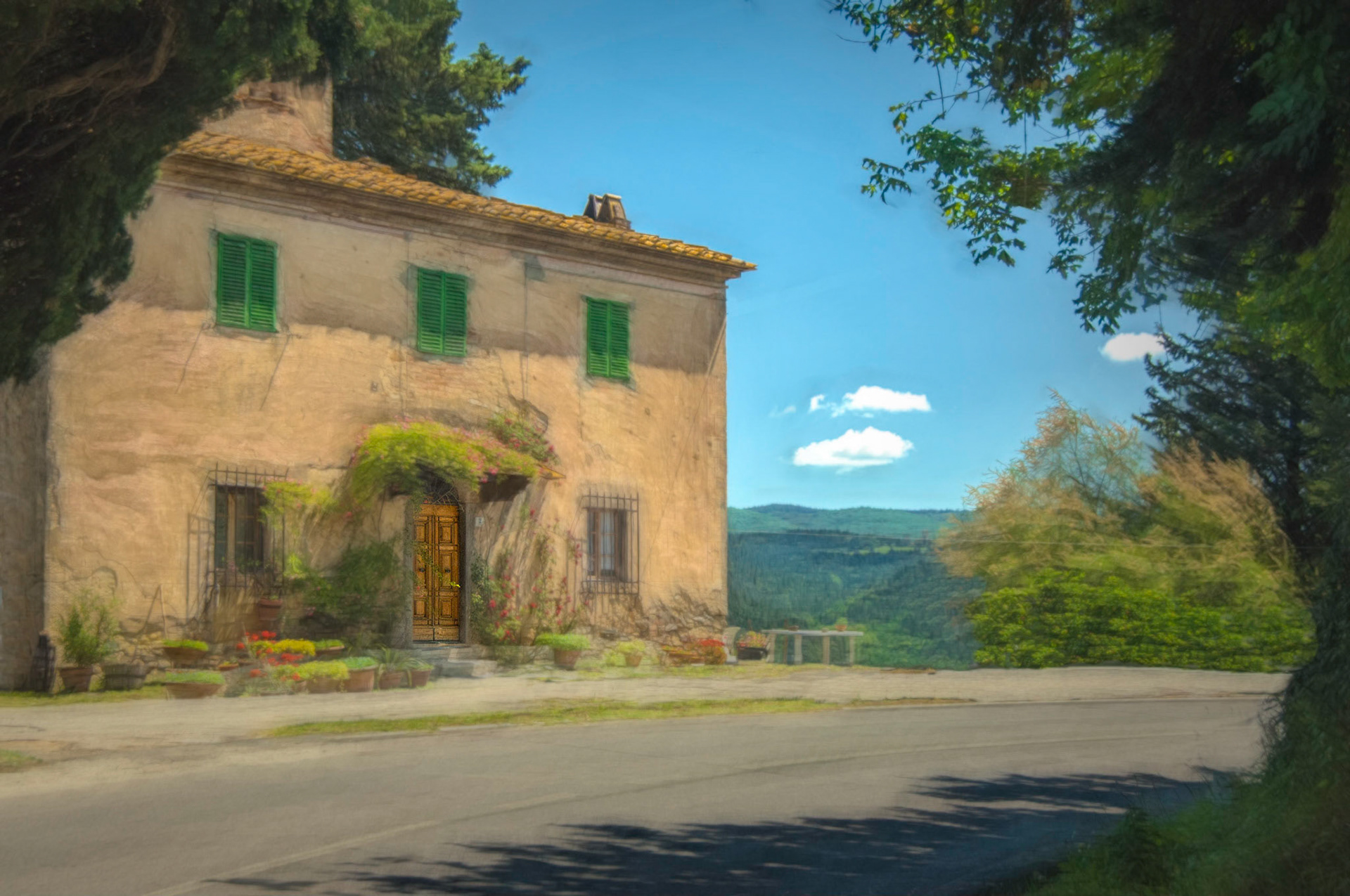 This farmhouse at Cedda is right on the road; the views out the back over the Tuscan countryside are magnificent. 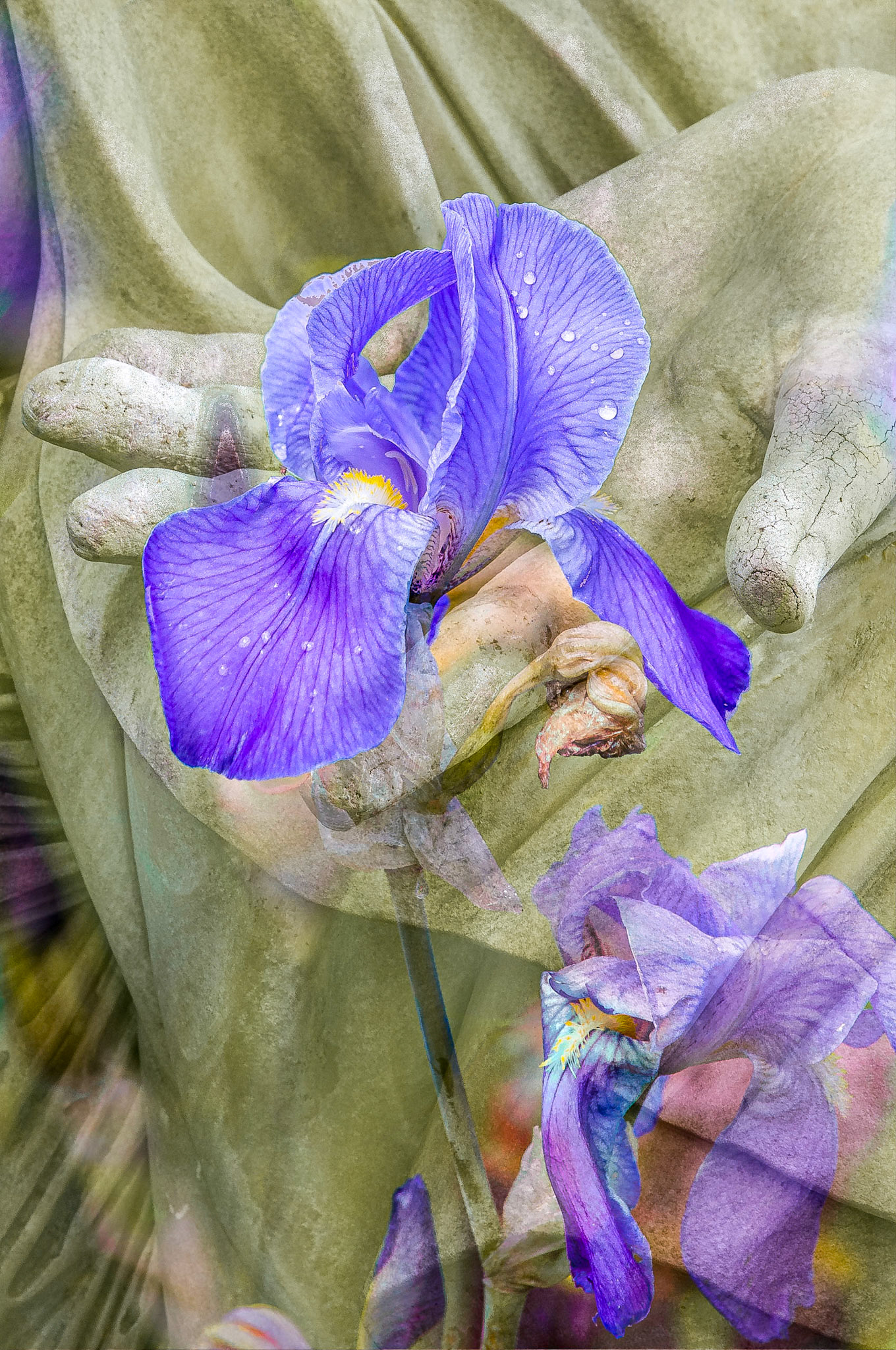 This composite image combines the sculpted hands (a detail of Pio Fedi’s sculpture, “The Rape of Polyxena”) made in Florence, Italy in the Loggia dei Lanzi. The softer, female element came from a photograph of an iris in an Italian garden. 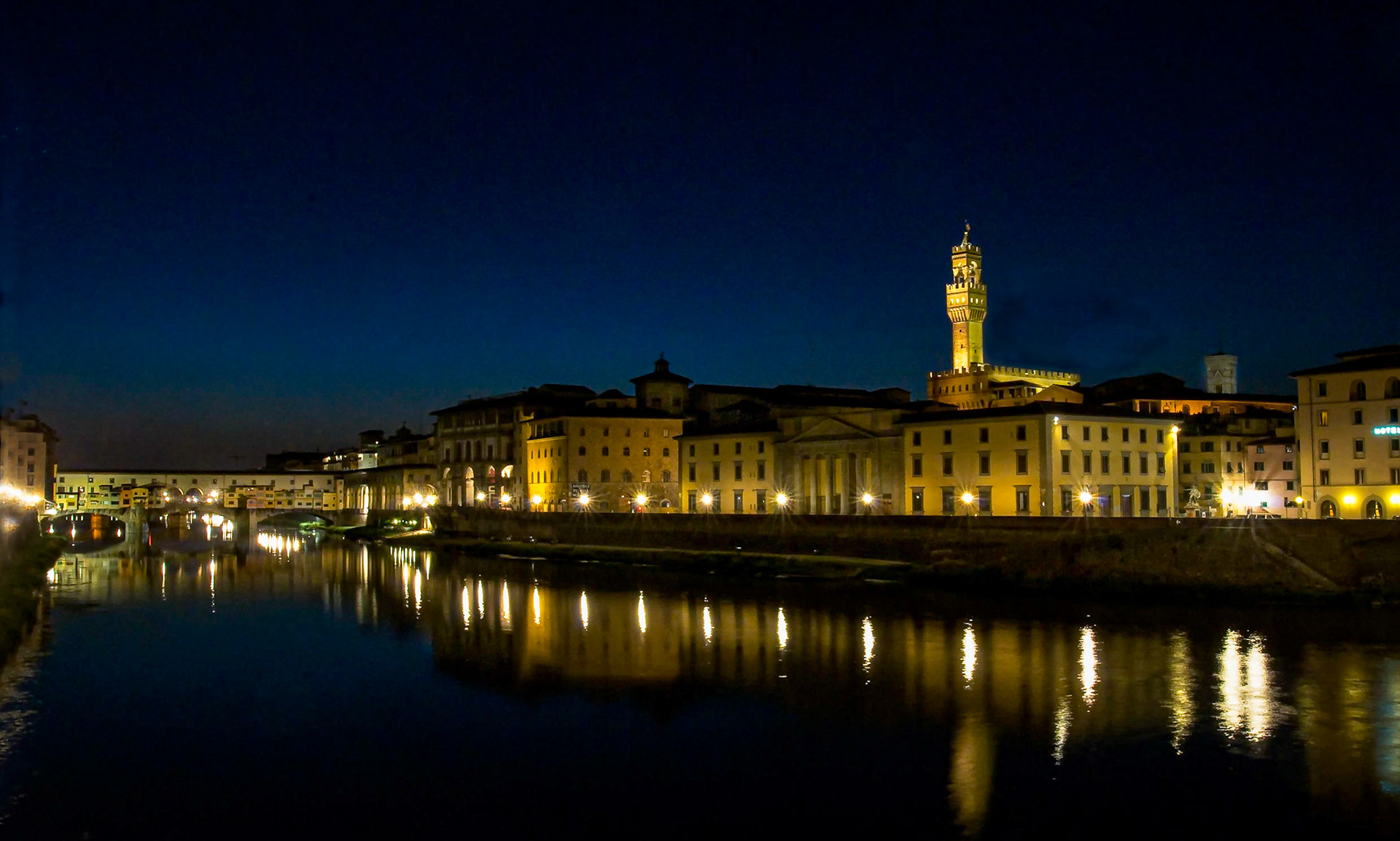 Night settles over the Arno River in central Florence, with the well-illuminated commerce arts buildings as well as the tower of the Palazzo Vecchio reflect3d in the calm water. June 2009 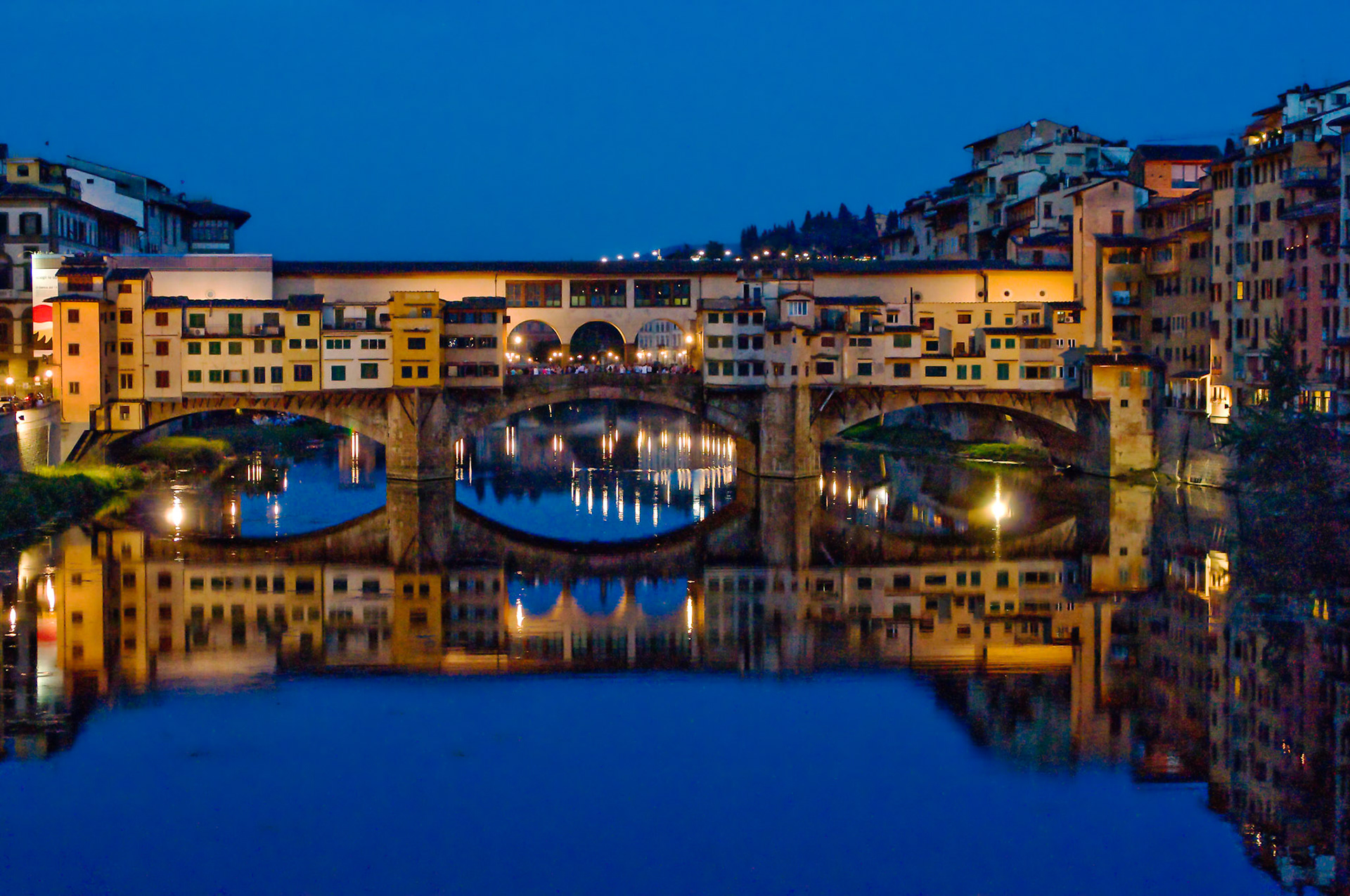 One of my favorite subjects in Florence is the Ponte Vecchio. The reflections in the placid waters of the Arno lend to the timelessness of this ancient structure.. 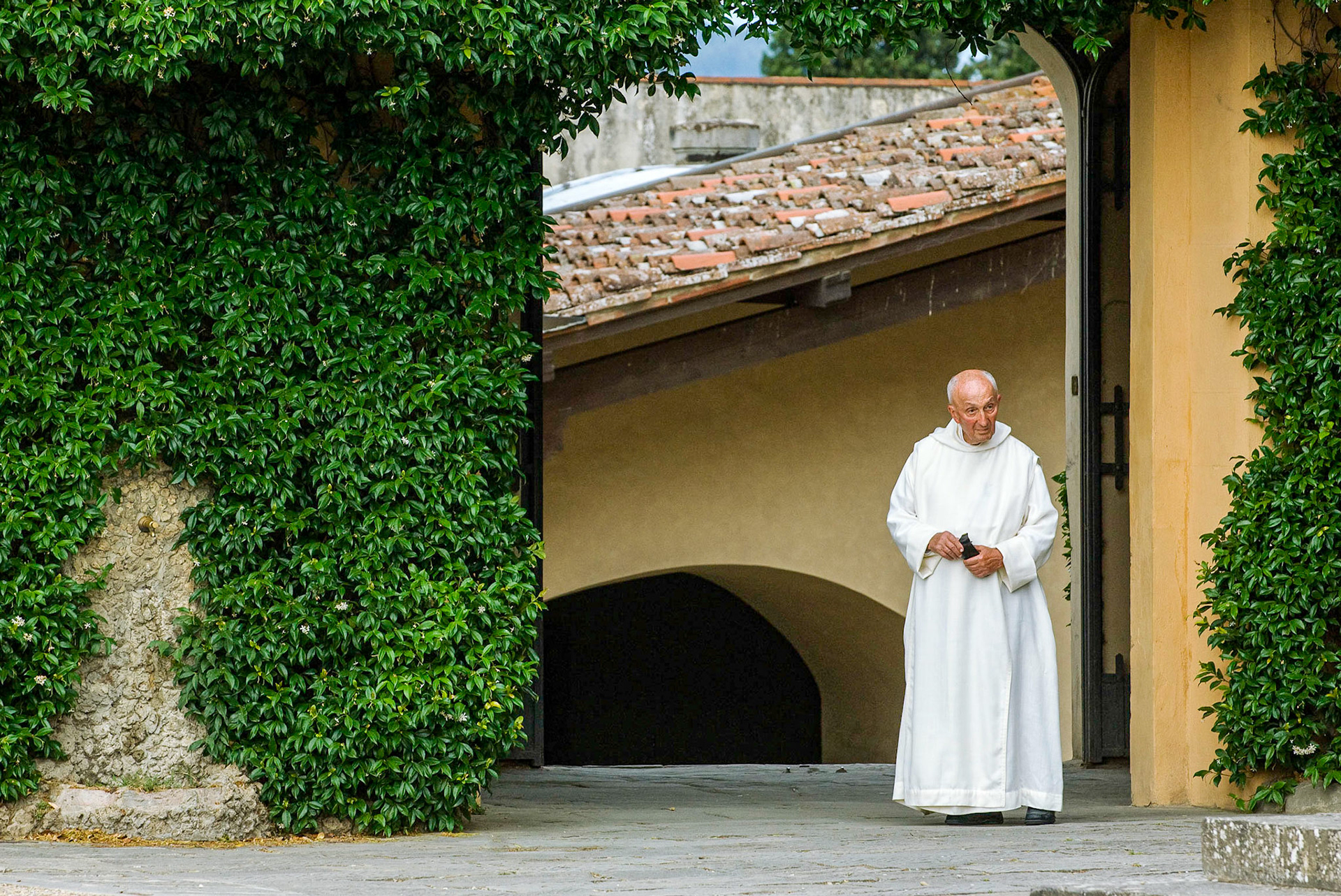 This white-robed cleric appeared in the courtyard leading from the Olivetan cloister at San Miniato al Monte. June 2009 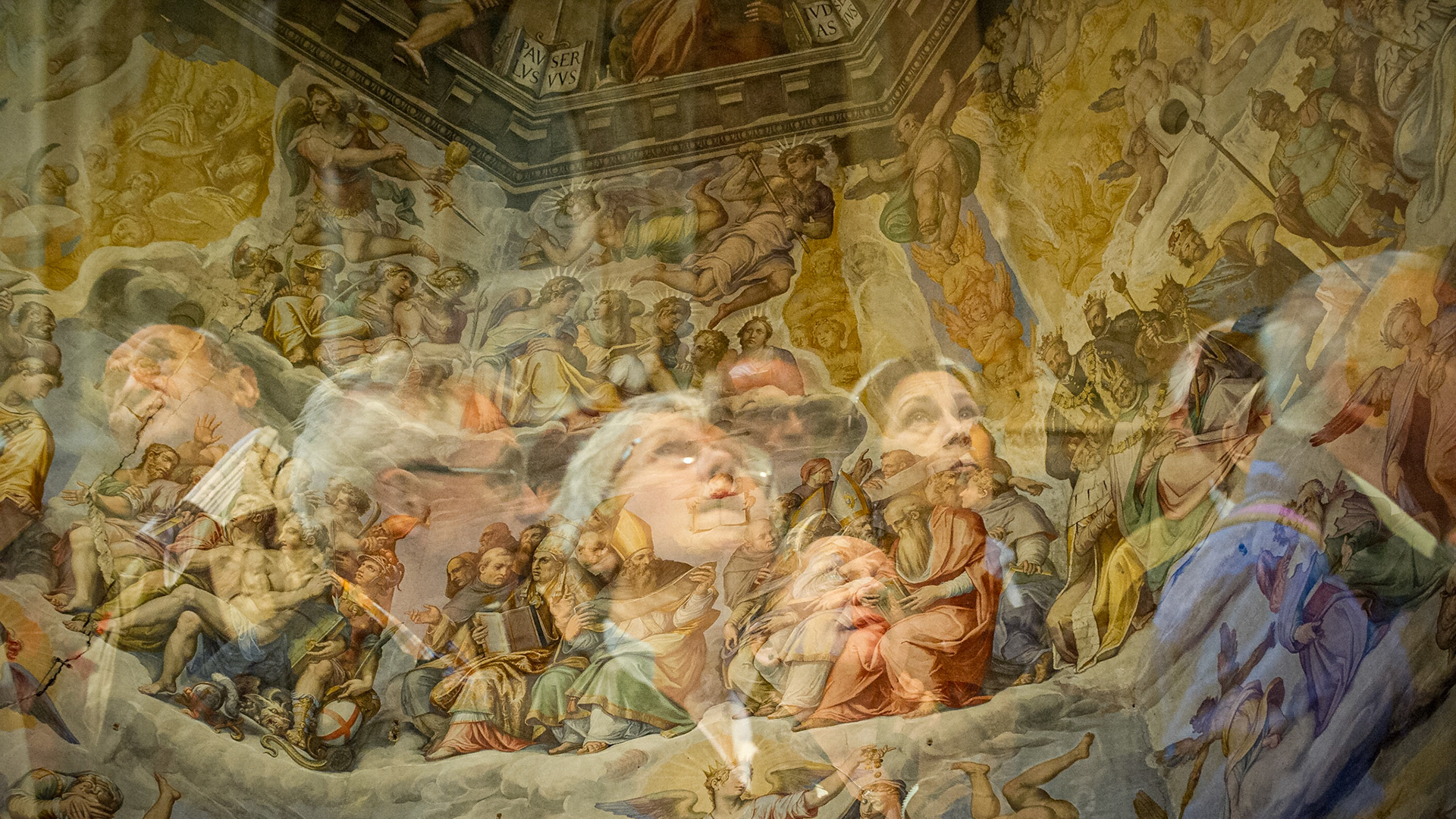 This in-camera composite juxtaposes Giorgio Vasari’s frescos in the dome of the cathedral in Florence with the spectators shot with a wide-angle lens. 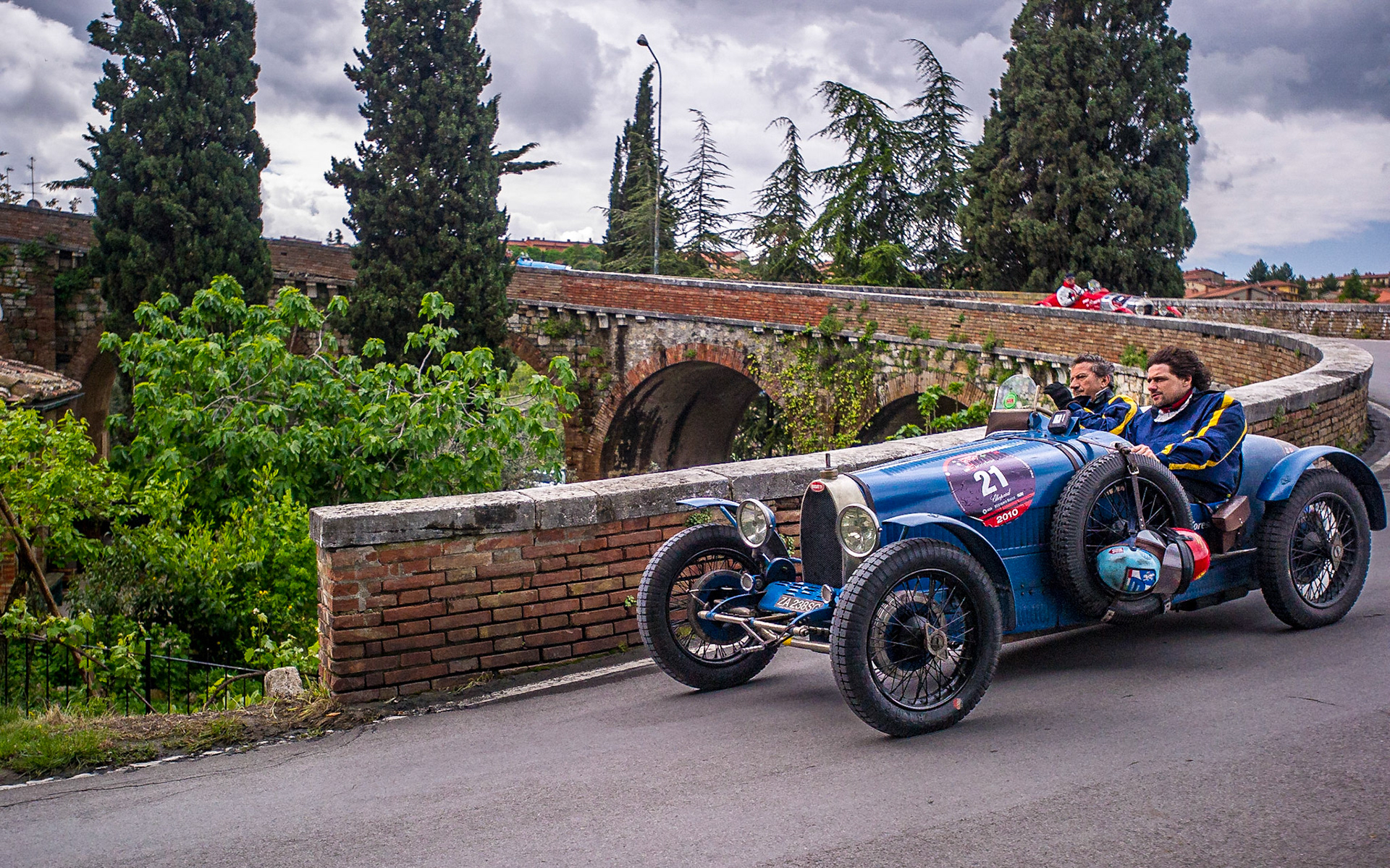 The contemporary Mille Miglia is a road rally for vintage cars. In 2010, I was in San Quirico d’Orcia when the parade of cars passed through. The vehicle captured here is a 1927 Bugatti Type 37.

Dancing After Dark
↑Back to Top